Born in 1946, Yann Arthus-Bertrand has always been passionate about the world of animals and natural areas. At age 20, he moved into the center of France and leads a nature reserve.

At thirty, he moved to Kenya with his wife Anne with whom he is conducting a study on the behavior of a family of lions in the Masai Mara reserve, which will last 3 years. Soon, he uses the camera to record observations in addition to writing. To make a living, he is at the same time balloonist. He discovers the world from the sky, and engages in aerial photography because it reveals another reality of a territory and its resources. It truly is at this time that he finds his vocation: witness by the image of the beauty of the Earth but also the impact of humans on the planet. This adventure gave birth in 1981 to his first book Lions, lions Yann Arthus-Bertrand likes to present as his "first photography teachers." 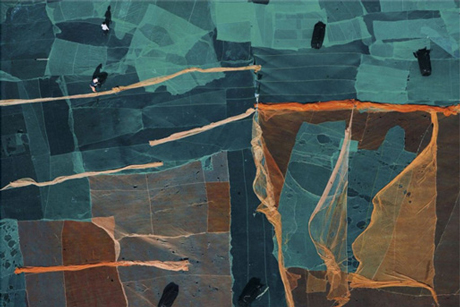 Yann became a photographer and works great story to newspapers such as National Geographic, Geo, Life, Paris Match, Figaro Magazine etc. Gradually, he began more personal work, particularly on the relationship man / animal books which come out of Cattle and Horses. On the occasion of the first Rio conference in 1992, Yann Arthus-Bertrand decided to go in a large photographic project for 2000 on the state of the world and its inhabitants: it's Earth View From Above . The book met with international success with more than 3 million copies sold and the outdoor photographic exhibition, presented in a hundred countries, was seen by some 200 million people.

Continuing its commitment to the environmental cause, the photographer creates GoodPlanet. Since 2005, this NGO is involved in the environmental education and the fight against climate change and its consequences. Within the foundation, develops Yann Project 6 billion Others, now 31 October 7 billion Others. The principle is simple: to meet the 7 billion inhabitants of the planet and collect their testimonies. To date over 6,000 testimonies were filmed in 84 countries. Brazilian fisherman to the Chinese shopkeeper, from the German artist to an Afghan farmer, all answered the same questionnaire about their fears, their dreams, their hardships, their hopes: some forty key issues and allow you to discover what separates us and what unites us.

Today Yann Arthus-Bertrand is seen more as an environmental activist than as a successful photographer. It is this commitment which earned him April 22, 2009 being appointed "Goodwill Ambassador" of the United Nations Environment Programme (UNEP).

Meanwhile, he is the author of “Vu du Ciel”, a television documentary series which each episode explores a particular environmental issue. The show is currently exported to 49 countries worldwide. With this TV experience, Yann Arthus-Bertrand carries a feature film, HOME, on the state of our planet. This film, released June 5, 2009 simultaneously with the television, Internet, DVD and in cinemas around the world, and often free, was seen by nearly 600 million viewers in over 100 countries.

In 2011, Yann Arthus-Bertrand has directed two short films for the United Nations, the first for the International Year of Forests and the second on desertification, both screened at general meetings.

Also within Hope Production, Yann realized with Michael Pitiot the "Ocean Planet" film that was presented in preview in June 2012 in Rio + 20, the World Summit of the United Nations Environment. At the same time, the GoodPlanet Foundation initiated the "Ocean Program" designed to raise public awareness to the preservation of marine ecosystems. At the heart of this program, published by Editions de la Martinière of the book "Man and the Sea".

In 2012, Yann began filming for his next feature film will be titled "HUMAN". At the crossroads of "Home" and the project "7 Billion Others," "Human" consists of interviews with people from all walks in over 45 countries, and aerial images gleaned worldwide.

In July 2013, Yann Arthus-Bertrand opened his photographic studio in PARIS to enable everyone to find his way to work, to better understand what is happening behind each of his photos. 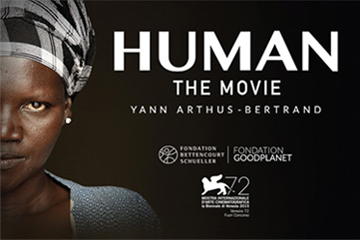 The September 12, 2015, worldwide launch of his film HUMAN, a diptych stories and images of our world offering an immersion in the depths of the human being.

Through the testimonies full of love, happiness, but also of hatred and violence, HUMAN confronts us with the Other and refers us to our own lives. From the smallest of everyday history to the most amazing life stories, these poignant encounters and a rare sincerity highlight what we are, our darkest part, but also what we have and more beautiful more universal. The Earth, our Earth, is sublimated through unpublished aerial images accompanied by music as an opera, which reflect the beauty of the world and offer us moments of breathing and introspection.

He signed in September 2015 in collaboration with the photographic agency HEMIS: www.hemis.fr, which takes the exclusive representation of the distribution of the images on France. All photographs are available for professionals of the Press, Publishing and Publicity.

In parallel, he signed also with Hemisgalerie: www.hemisgalerie.com, on line purchase of his works in signed prints, made in his workshop by his team and under his leadership.

The work of Yann Arthus-Bertrand has shown its commitment to arouse a collective and responsible conscience. In this perspective the more awareness.